Fringe gets a thirteen-episode fifth season 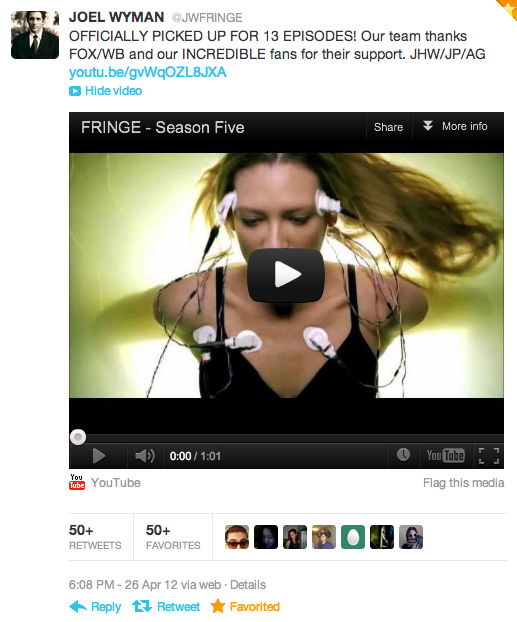 Per J.H. Wyman's Twitter page, as of last night Fringe has been picked up for a thirteen-episode fifth season, which hopefully means that we will get to find out more about the dystopian future, the bald-headed oppressors' ultimate plan, and what happened to Olivia.

Of course, in the alternate universe, Fringe gets ten million viewers every week and will run for at least six seasons (and possibly a movie?), but on this Earth we're just grateful that the writers are being given a chance to wrap up the storyline. Talking to EW.com, executive producer J.J. Abrams promised a "wild and thrilling" conclusion, while showrunners Wyman and Jeff Pinkner thanked the show's "enthusiastic fans," and guaranteed that season 5 will be a "conclusive thrill ride."

And yes, there is somehow already a trailer for the fifth season. Enjoy, and tune in tonight, when you can finally watch an episode of Fringe without feeling a lurking sadness in your soul.

Email ThisBlogThis!Share to TwitterShare to FacebookShare to Pinterest
Labels: Fringe, Now with Video, Save Fringe