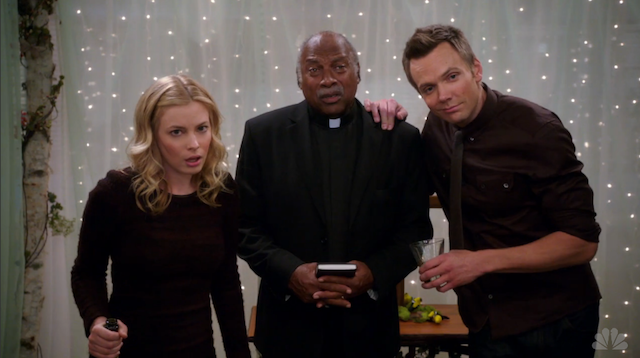 "Urban Matrimony and Sandwich Arts" wasn't the type of over-the-top, completely bonkers episode, like "Remedial Chaos Theory" or "Modern Warfare" that gets fans and viewers salivating over how great the show is. It was more akin to two of my personal favorites, "Critical Film Studies" or "Mixology Certification" - a half-hour that was firmly grounded in reality, focused on character development and redolent with the pain of these people who have all, in some way or another, had their dreams snatched away from them.

That's not to say the episode wasn't funny, because it contained some truly great comic set pieces; Jeff and Britta's drunken mock-wedding was a highlight, and Gillian Jacobs and Joel McHale played the hell out of it. And there was a good amount of bonkers as well, mostly provided by Troy and Abed's hilarious attempt at normalcy. But the episode was really centered on four characters - Shirley, Pierce, Jeff and Britta - coming to realizations that they haven't ended up where they wanted to be in life, and trying to come to terms with who they are now.

This probably explains why the youngest study group members largely served as comic relief. Annie, Troy and Abed are all still at a point in their lives where they haven't given up on their ambitions, and their optimism that things can change - particularly Annie's conviction that Jeff just has to look into his heart to figure out how much he cares about Shirley, hilariously proven wrong when his heart comes up with a McCallan neat - provides a counterpoint to the resigned bitterness of the other characters.

The real star of the episode was Shirley. This was a great episode for the character, who is generally the least developed member of the study group and the most likely to slip into stereotype. Yvette Nicole Brown did a wonderful job of striking the right balance between Shirley's desire to return to her husband and her newfound self-respect and ambition. And Shirley's business acumen has me convinced that, despite the setback at the end of the episode, she'll manage to start her own, successful business and become the breadwinner for her family.

The character I'm worried for, however, is Pierce. His storyline in the episode was heartbreaking, despite the Gordon Gekko suit and the malfunctioning trouser chair (which Chevy Chase, who has a true gift for physical comedy, absolutely nailed). Pierce's firing from Hawthorne Wipes was somewhat predictable, but the line where he tells Shirley that he's just a kid with money, not a businessman, was incredibly poignant. He's essentially a trust-fund baby who has to prove himself, alone, but he's not a twenty-something with his whole life ahead of him. He's in his sixties (seventies? do we know how old Pierce is?), and he's just been thrown back in the deep end of the pool.

Of course, when you're talking about daddy issues, Jeff Winger is bound to come up. Jeff and Britta's stories in this episode were all about the pain under their jaded cynicism. This isn't exactly a novel storyline for either character, but it fit well within the episode's structure, and Jacobs' and McHale's excellent drunk acting kept their scenes funny. The contrast between these two and the episode's younger contingent helps explain Britta's attraction to Troy and Jeff's to Annie (did you notice that Annie's face flashed multiple times in Jeff's heart's slot machine?); they're both looking for innocence and optimism. Annie's frilly wedding binder and Troy's excited whimsy are the antidote to Jeff and Britta's callous disillusionment.

Enough with the darkness: Community is back, its ratings have increased, and even the Chicago weather is celebrating! (75 and sunny, people!) So let's look at some of the best lines and funniest moments from "Urban Matrimony and Sandwich Arts":

Email ThisBlogThis!Share to TwitterShare to FacebookShare to Pinterest
Labels: Community, Recap, Save Community, Six Seasons and a Movie