Trying to understand the 30 Rock backlash 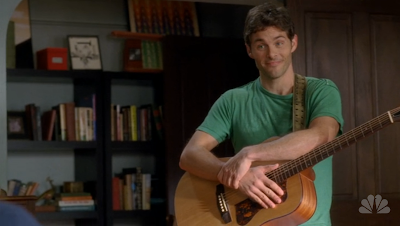 Jesse David Fox over at Splitsider has perfectly explained my disagreement with the critical backlash directed against 30 Rock's sixth season, citing the show's newfound sentimentality and character development:


When you ask the viewer to invest more in the characters, there is a greater possibility of them not liking whom they see. Early this month NPR posted a decidedly myopic argument about how Liz Lemon has become a needy toddler. They wrote, at 30 Rock’s “core, initially, was a likable, smart, profoundly flawed woman trying her hardest to navigate all manner of show-business nuttiness that surrounded her. Now, she just seems flattened and robbed of everything that made her relatable.” If anything, Liz, by becoming less flattened and more specific, has become harder to project oneself upon, which NPR seemingly confused with regression. Liz is not devolving, if anything this season is about her growing more comfortable with her absurd surroundings. She is further freed up by her relationship with Criss. Of all Liz’s boyfriends, he has been the most accepting of all her quirks, saying in the Valentine’s Day episode, “You can get mad at dumb stuff, that’s your thing. I’ll get over it, that’s my thing.” With a supportive environment like this, Liz has never been more able to let her freak flag fly, which for her means dressing like The Joker if he was an crazy old lady.

I pointed to 30 Rock's newfound heart in my review of the season's first episode, and my fondness for the new tone has only increased. Fox mentions one of my absolute favorite moments from the show's hourlong Valentine's Day episode: the way Criss easily moves past the fight he and Liz had by not only acknowledging her crazy, but accepting it and loving her for it.

The reason that I loved this moment, just as I loved Criss' earlier refusal to get drawn into Jack's attempt to control Liz's love life, was the maturity it signaled for their relationship. Real, adult relationships don't happen if one party is completely changing themselves for the other person. They happen because two people accept each other's flaws and accomodate them*. Criss loves Liz enough that he doesn't care if she gets mad at dumb stuff, and he's able to handle her crazy because of that love. Criss might be an unemployed guy whose goal in life is to run an organic hot-dog stand, but that scene showed his maturity. Like I said of the season premiere, I really want to see Liz Lemon ride off into the sunset at the end of series, and her relationship with Criss seems to be inching the character closer to that goal.

Liz isn't the only character undergoing some changes; Jack, in last week's fantastically weird Dark Knight parody, allows his uncertainty over his job, the loss of Avery, his daughter and his city to paralyze him, while Jenna and Paul's relationship, despite it's absolute insanity, grows more grounded every week. Really, though, my first love on 30 Rock is always Liz Lemon. If she's happy, I'm happy, and so I'm loving every minute of this season.

*I'll admit that one reason I love this moment so much is because it strongly resembles my own relationship, where I'm the crazy Liz and my fiance is the calm Criss, so I might a little biased.
Posted by Alex Israel at 11:00 PM