Halloween is tomorrow, and we all know that there's only one TV show that provides enough scares, gore and general creepiness for the holiday. And no, it's not The Walking Dead or American Horror Story. It's Fringe. So, in honor of All Hallow's Eve, come feast on a gallery of Fringe's creepiest, crawliest, downright grossest moments. (Warning: the pictures below are not for the faint of heart. Proceed with caution.)


Fringe has featured multiple instances of exploding heads during its three-year run. In The Cure, a woman's head explodes in a diner after undergoing an experimental treatment to cure Bellini's Lymphocemia. And in The Box, a midget with unfortunate luck agrees to babysit a mysterious box for Thomas Jerome Newton, only to have it blow up his head with soundwaves. People of the Fringe universe: never agree to hold onto someone's mysterious box. It won't end well for you.

Suffocated by your own skin

It was bad enough when, in the opening minutes of Ability, a newspaper vendor was suffocated by the skin that grew over every orifice in his body. But when the parasitic skin problem - spread by contact with a chemical agent on a two-dollar bill - killed an FBI agent by growing over the tracheotomy tube Olivia had inserted in the guy's neck, that was just awful. And by awful, I mean fantastic in the grossest possible way.

Before Jacksonville aired, we knew that the instability between the two universes was problematic. But nobody knew the extent of the problem until we saw poor Ted Pratchett, merged with his Other Side self on the floor of his office building, his own face staring at him out of his stomach. Let's deal with that whole Earth-2 instability thing, shall we?

Chucky's got nothing on this plaything

You might think that a re-assembled dead ballerina dancing while hooked up to a puppetry system that resembles a medieval torture device would automatically be the creepiest thing to happen in any given episode. However, if you thought that, you are obviously not familiar with Fringe. The undead dancer is absolutely trumped by the shot of the unfortunate man who received her corneas in a transplant, standing in the dark while Olivia's flashlight illuminated his empty, bloodied eye sockets. I didn't include that picture, because it still haunts my dreams. 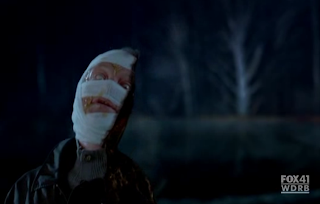 Jones was already looking pretty bad by the time we got to "There's More than One Of Everything." The teleport that he used to escape from prison had ravaged him, leaving us with glimpses of boils and pus behind bandages. But then, Jones was interrupted during his escape to the Other Side when Peter closed the portal with Jones only halfway through, leaving the man to sink to the ground with half his body missing. Those alternate-universe portals need to be handled with care.

Steak in a can

The dystopian future that Peter visited in the third-season finale "The Day We Died" might not have seemed that bad. Sure, there were terrorists blowing holes in the universe and massive quarantine zones, but someone had discovered the cure for aging (or so I must assume, since everyone looked the same age as they had ten years before). But then, Peter and Olivia started to make a romantic steak dinner. With steak from a can. A can. We must avert this future at all costs, people!
Posted by Alex Israel at 11:39 PM